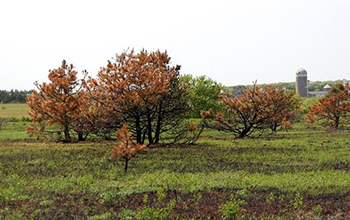 A new study in the journal Nature Sustainability overturns long-held interpretations of the role humans played in shaping the American landscape before European colonization. The findings give new insight into the rationale and approaches for managing some of the most biodiverse landscapes in the eastern U.S.

The NSF-funded study, led by archaeologists, ecologists, and paleoclimatologists at Harvard University, Emerson College and other institutions, focused on the coast from Long Island to Cape Cod and the nearby islands of Nantucket, Martha’s Vineyard, Block Island, and Naushon — areas that historically supported the greatest densities of Native American people in New England.

Today they are home to the highest concentrations of rare habitats in the region, including sandplain grasslands, heathlands, and pitch pine and scrub oak forests.

“For decades, there’s been a growing popularization of the interpretation that, for millennia, native people actively managed landscapes — clearing and burning forests, for example — to support horticulture, improve habitat for important plant and animal resources, and to procure wood resources,” says study co-author David Foster, director of NSF’s Harvard Forest Long-Term Ecological Research site. This active management is said to have created an array of open-land habitats and enhanced regional biodiversity.

But, Foster says, the data reveal a different story. “Our data show a landscape that was dominated by intact, old-growth forests that were shaped largely by regional climate for thousands of years before European arrival.”

Fires were uncommon, the study shows, and native people foraged, hunted and fished natural resources without actively clearing much land.

The authors say the findings transform thinking about how landscapes have been shaped in the past — and therefore how they should be managed in the future.

“This study shows the importance of testing assumptions,” says Doug Levey, a program director in NSF’s Division of Environmental Biology. “In coastal New England, other factors appear to have had a greater impact on the region’s ecosystems than early Native Americans did.”