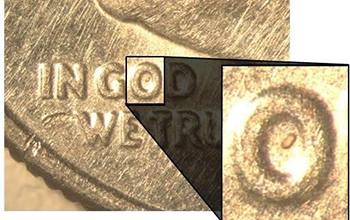 Deep within Earth, swirling liquid iron generates our planet’s protective magnetic field. This magnetic field is invisible but is vital for life on Earth’s surface: It shields the planet from harmful solar wind and cosmic rays.

Given the importance of the magnetic field, scientists have been trying to figure out how the field has changed throughout Earth’s history. That knowledge can provide clues to understanding the future evolution of Earth, as well as the evolution of other planets in the solar system.

New NSF-funded research from the University of Rochester provides evidence that the magnetic field that first formed around Earth was even stronger than scientists previously believed. The research, published in the journal Proceedings of the National Academy of Sciences, will help scientists draw conclusions about the sustainability of Earth’s magnetic shield, and whether there are other planets in the solar system with the conditions necessary to harbor life.

“This research is telling us something about the formation of a habitable planet,” says paper author John Tarduno, Dean of Research for Arts, Sciences, and Engineering at Rochester. “One of the questions we want to answer is why Earth evolved as it did, and this gives us even more evidence that the magnetic shielding was recorded very early on the planet.”

While the researchers initially believed that Earth’s early magnetic field had a weak intensity, the new data suggest a stronger field. But, because the inner core had not yet formed, the strong field that originally developed 4 billion years ago must have been powered by a different mechanism.