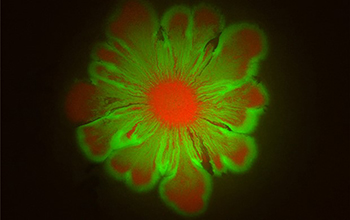 Microbial communities inhabit every ecosystem on Earth, from soil to rivers to the human gut. While single-species microbial cultures are often used in labs, in the real world, many different microbial species inhabit the same space. NSF-funded researchers at the University of California, San Diego have discovered that when certain microbes pair up, stunning floral patterns emerge. Understanding the patterns could have important implications for studying biofilms.

In a paper published in eLife, researchers report that when non-motile E. coli are placed together with motile A. baylyi, the E. coli “catch a wave” at the front of the expanding A. baylyi colony. Motility is the ability of an organism to move independently.

When E. coli and A. baylyi are mixed together, both strains flourish and spread as the non-motile E. coli hitch a ride on the highly mobile A. baylyi. Intricate flower-like patterns then emerge in the colony over a 24-hour period.

To uncover how the flower patterns form, the researchers developed mathematical models that considered the different physical properties of the two strains.

Further analysis suggests this type of pattern forms when motile bacteria are mixed with a non-motile strain that has a higher growth rate or effective surface friction, which could have important implications in studying biofilms.

Biofilms are communities of microorganisms—including bacteria and fungi—that adhere to each other and to surfaces, creating strong matrices that are difficult to break down. Common examples include dental plaque and “pond scum.” They also grow in medical devices such as pacemakers and catheters. Learning how non-motile bacteria “stick” to motile bacteria may provide insight into how biofilms are formed and how they can be eliminated.

“Studying interactions in biological entities such as bacteria and their emergent structures is important for understanding pattern formation in complex systems,” says Krastan Blagoev, a program director in NSF’s Division of Physics. “NSF supports this kind of research because these natural structures are efficient in resource management and can help us build more efficient infrastructure.”