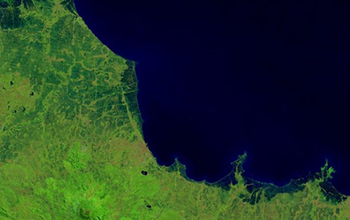 Researchers at the Woods Hole Oceanographic Institution and other institutions have found that delta areas worldwide have gained land in the past 30 years, despite river damming. But recent land gains are unlikely to last throughout the 21st century due to expected accelerated sea level rise. The researchers published their findings in the journal Nature.

River deltas rank among the most economically and ecologically valuable environments on Earth.

Many deltas experience a decline in sediment supply due to upstream damming. However, the new study found that long-term, large-scale, upstream deforestation has resulted in soil erosion that increased the amount of sediment transported to many deltas.

The scientists found that 25% of delta growth can be attributed to upstream deforestation, resulting in soil erosion and increasing sediment delivery to the coast. Human action such as damming causes sediment starvation and increased importance of wave- and tide-driven transport, which can also change delta shape.

The relationship between the sediment deposited by rivers, the forces of waves and tides, and delta shape has remained poorly understood. To address this, the NSF-funded researchers developed and applied a new theory that can quantify how waves and tides influence delta shape. The availability of global satellite imagery allowed the scientists to test the new model on more than 10,000 deltas worldwide, ranging from small deltas to mega-deltas.

“Applying this novel prediction of delta shape to global examples allowed us to quantify how delta shape affects change,” says WHOI geologist Andrew Ashton, a coauthor of the paper. “For example, when sediment supply diminishes, deltas dominated by waves tend to erode, while tide-dominated deltas continue to grow.”

Adds Justin Lawrence, a program director in NSF’s Division of Earth Sciences, “This advance in our scientific understanding can aid local management of delta areas and could have important implications for their economies.”