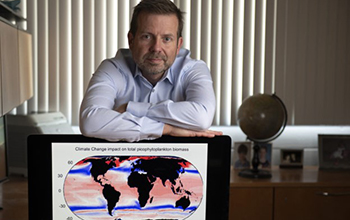 A neural network-driven Earth system model has led University of California, Irvine, oceanographers to a surprising conclusion: Phytoplankton populations in low-latitude waters may well expand by the end of the 21st century, said the NSF-funded scientists.

The unexpected simulation outcome runs counter to a long-standing belief by many environmental scientists that global climate change will make tropical oceans inhospitable to phytoplankton, which form the base of the aquatic food web. The researchers provide evidence for their findings in a paper published in Nature Geoscience.

Senior author Adam Martiny of UCI explained that the prevalent thinking on phytoplankton biomass stems from the expectation of an increasingly stratified ocean. Warming seas inhibit mixing of the heavier, colder layer in the depths with lighter, warmer water closer to the surface. With less circulation between these levels, fewer nutrients would reach the higher strata to be accessed by hungry plankton.

Scientists traditionally study plankton by measuring the amount of chlorophyll in the water. There is less chlorophyll in low-latitude regions that are hotter, compared to cooler regions farther away from the equator.

“The problem is that chlorophyll is not everything that’s in a cell, and actually, in low latitudes, many plankton have a very small amount,” Martiny said. “There’s so much sunlight that plankton only need a few chlorophyll molecules to get enough energy to grow.”

Added Mike Sieracki, a program director in NSF’s Division of Ocean Sciences, “Plankton are incredibly diverse, and global models cannot capture the range of possible responses of this entire community. This valid model result demonstrates that we still have a long way to go to confidently predict phytoplankton responses to a changing ocean.”