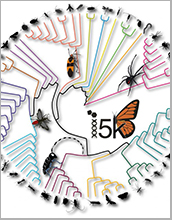 Comparative analyses by scientists at the Swiss Institute of Bioinformatics and other institutions of 76 arthropod species spanning 500 million years of evolution reveal genomic changes that point to key factors behind these species’ success.

The international team reported results from a pilot project called i5k in the journal Genome Biology, kick-starting the global sequencing initiative of thousands of arthropods.

Arthropods make up the most species-rich and diverse group of animals on Earth, with numerous adaptations that have allowed them to exploit all major ecosystems. They play vital roles in the healthy ecology of our planet and are both beneficial and detrimental to the success of humankind through pollination and biowaste recycling or destroying crops and spreading disease.

The team’s analyses, partially funded by the National Science Foundation, focused on tracing gene evolutionary histories to estimate changes in gene content and gene structure. That enabled identification of families of genes that have substantially increased or decreased in size, newly emerged or disappeared, or rearranged their protein domains, between and within each of the major arthropod subgroups.

The gene families found to be most dynamically changing encode proteins involved in functions linked to digestion, chemical defense and the building and remodeling of chitin — a major component of arthropod exoskeletons.

Adaptability of digestive processes and mechanisms to neutralize harmful chemicals likely served arthropods well as they conquered a variety of ecological niches, the scientists say. The flexibility that comes with a segmented body plan and a dynamic exoskeleton allowed arthropods to thrive.

“Studies of genome evolution are advancing our understanding of scaling in terms of the depth of time, numbers of species, and functional relationships they address,” says Peter McCartney, a program director in NSF’s Division of Biological Infrastructure. “The division supports shared computational resources that allow teams to conduct analyses like this one, which would have been difficult to accomplish in an individual lab.”