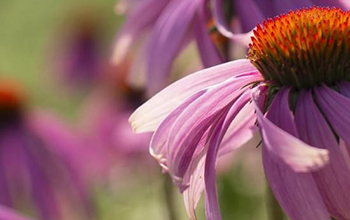 A new study has discovered that fires are critically important to successful reproduction in prairie plants. Scientists at the Negaunee Institute for Plant Conservation Science and Action at the Chicago Botanic Garden found that fires help plants flower and find mates. Researchers observed 778 individual plants for 21 years on Staffanson Prairie in western Minnesota.

During the National Science Foundation-funded study, which ran from 1996 to 2016, ecologists conducted prescribed burns, burning no more than half the preserve each time.

They found that a fire synchronizes the blooming time of the prairie plant Echinacea angustifolia, commonly known as the narrow-leaved purple coneflower. Synchrony measures how much flowering time overlaps — the more overlap, the more mating opportunities, or chances for bees to move pollen among Echinacea plants. When plants flower at the same time, seed production increases.

“In most years, plants are isolated from other plants because few flower — they produce few seeds,” said Stuart Wagenius, a scientist at the Negaunee Institute and the project’s lead researcher. “However, in the summer right after a fire, many plants flower, they are not isolated, they get pollinated and they produce many seeds.”

The benefits of synchronized flowering after a fire keep populations healthy and avert local extinctions in Echinacea and many other prairie plants, he said.

The results are published this week in Proceedings of the National Academy of Sciences.

“Fire can play both a destructive and constructive role in natural communities,” said Sam Scheiner, a program director in NSF’s Division of Environmental Biology. “This type of long-term study is often needed to see its constructive role.”