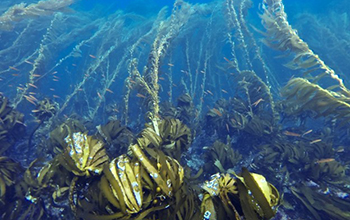 The health of species like kelp promotes ecosystem stability

Certain species serve as the foundations of their ecosystems. Scientists are increasingly interested in ecological stability — the factors that allow an ecosystem to withstand pressures and perturbations — especially in view of human impacts such as climate change and pollution.

Now, researchers at the University of California, Santa Barbara have leveraged long-term ecological data to probe this question in Southern California’s kelp forests. They found a correlation between the stability of giant kelp and the stability of understory seaweeds and seafloor invertebrates, such as sponges, as well as higher biodiversity overall. The results appear in the journal Ecology.

The scientists had the benefit of nearly two decades of data and observations, courtesy of the Santa Barbara Coastal Long-Term Ecological Research site. The SBC LTER is part of a network of LTER sites funded by the National Science Foundation.

A foundation species shapes its entire environment and defines an ecosystem. “The ecosystems in which these species live are often named after them, such as oyster beds, coral reefs and redwood forests,” said Robert Miller, director of the NSF SBC LTER site and one of the paper’s co-authors. Foundation species provide the ecosystem’s physical structure or main source of food, and have a strong effect on other species that live there.

The scientists pored over 18 years of ecological data from nine shallow reefs in the Santa Barbara Channel. The information included species size and abundance, biodiversity and biomass. The team found a link between the stability of the giant kelp and the stability of understory macroalgae and seafloor invertebrates.

“That’s the advantage of NSF’s LTER program,” Miller said. “It enables us to look at long-term questions that are critical to ecology.”

This study “reinforces and substantiates the concept of foundation species,” said Dan Thornhill, a program director in NSF’s Division of Ocean Sciences. “It’s also one of the many intriguing discoveries made possible by NSF’s support of long-term, site-based research.”