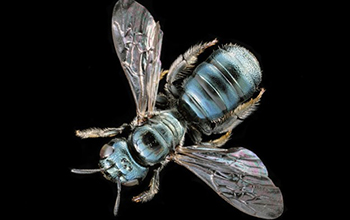 The complex social life of honeybees — with their queens and workers cooperating to produce honey — is deeply entrenched in the public’s imagination. But the majority of the world’s more than 20,000 bee species are solitary: One female mates, gathers provisions, lays eggs and walls them up with food in a secure spot.

Recent research at the University of New Hampshire advances our understanding of the evolutionary shift from honeybees’ loner ancestors to the social beings they are now. “We know that the honeybees of today evolved from solitary ancestors, but we’re still figuring out what biological factors may have contributed to that gradual process,” says Wyatt Shell, lead author of the study, published in Proceedings of the Royal Society B.

The subject of the NSF-funded research, the North American small carpenter bee (Ceratina calcarata), has a simple sociality. “For example, instead of departing the nest after laying her eggs, a mother may guard her brood while being supported by just a single working daughter,” says Shell.

Comparing relative brain gene expression levels of this carpenter bee, Shell and co-author Sandra Rehan examined which genes might be associated with traits of foraging (visiting flowers to collect pollen and nectar) and guarding (sitting at the nest entrance to prevent predation or parasitism).

These traits are simultaneously demonstrated by a mother bee and one of her daughters during the early autumn, giving the researchers an opportunity to explore the effects of maturation — from pre-reproductive daughters to post-reproductive mothers — on gene expression.

“This research helps in understanding how the complex social behavior many species show could have developed,” says Jodie Jawor, a program director in NSF’s Division of Integrative Organismal Systems. “How genes influence behavior is an active area of research to understand how behavior evolves, and how behaviors such as group living and collective activities, as seen in the honeybees, are maintained.”