Aerosols have an outsized impact on extreme weather 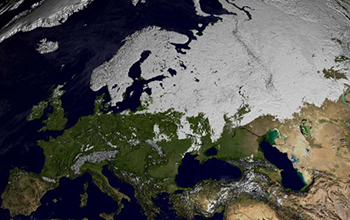 Scientists have tied a shift in winter weather patterns in Europe and northern Eurasia to a reduction in aerosols — solid particles polluting the atmosphere from activities such as burning coal.

Over the past 50 years, the occurrence of extremely cold days has decreased throughout the region, which includes Russia. Combining long-term observations with a state-of-the-art climate model revealed what researchers describe as an “unambiguous signature” of the reduced release of man-made aerosols over that time.

That has caused changes in the wintertime Northern Hemisphere polar jet stream (a swiftly moving channel of air flowing from west to east) and surface temperature variability.

The National Science Foundation-supported work suggests that aerosols can have a stronger  impact on extreme winter weather than greenhouse gases at the regional scale, although the relationship between aerosols and extreme weather is complex.

“This discovery underscores the importance of understanding the effects of anthropogenic aerosols for accurate climate projection of extreme weather events, which is crucial to formulating climate mitigation and adaptation strategies,” says Yuan Wang, a scientist at Caltech and the Jet Propulsion Laboratory and lead author of the study published in Nature Climate Change.

Wang and his colleagues found that warmer temperatures in Europe led to a stronger temperature gradient between Europe and the North Pole, which in turn helped lock the jet stream into a stable, relatively straight position.

When the jet stream meanders, dipping south, it can carry cold arctic air to more southern latitudes. Some climate models have predicted that the steady increase in arctic temperature, caused by greenhouse gas-driven global warming, could weaken the jet stream and cause it to meander. Wang’s team has found a complicated underlying mechanism.

“The importance of this study lies in revealing the link between human-made atmospheric particles and long-term variability of extreme winter weather,” says Chungu Lu, a program director in NSF’s Division of Atmospheric and Geospace Sciences.