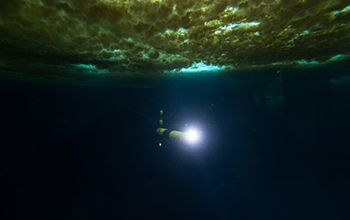 During the first study of the ocean floor beneath Antarctica’s Thwaites Glacier, scientists took images of the glacier’s foundations. Thwaites now accounts for about 4% of global sea level rise, and researchers have had concerns that a tipping point in the stability of the glacier could result in a runaway collapse.

The research team hopes to obtain a clearer picture of conditions in the area where the glacier begins to float, known as the grounding zone, which is key to Thwaites’ potential to become more dangerous.

The images were taken by a robotic underwater vehicle as part of a broad set of data collected by several field teams. The International Thwaites Glacier Collaboration announced the completion of this phase of the research in sync with the 200-year anniversary of the discovery of Antarctica in 1820.

The underwater robot, Icefin, was developed by researchers at Georgia Tech and is part of a collaboration between scientists in the U.S. and the U.K. that is supported by the National Science Foundation and the U.K.’s Natural Environment Research Council.

A runaway collapse of the glacier would increase sea levels by as much as 25 inches. “By studying multiple aspects of Thwaites, these scientists aim to fill in key blanks in our understanding of the processes and physical setting of this Florida-sized glacier,” says Paul Cutler, a program director in NSF’s Office of Polar Programs. “Then researchers can better assess its potential threat over the coming decades.”