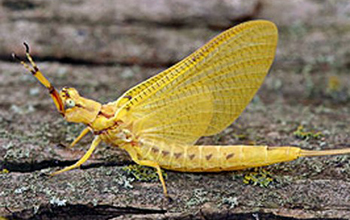 Mayflies, important food for birds, may be latest ‘canaries in the coal mine’

At the beginning of each summer, mayfly larvae emerge from bodies of water and shed their skin to become full-fledged mayflies, similar to the way in which caterpillars become butterflies. Then, all at once, these insects fly away to reproduce, acting as an important component of the food chain for birds.

Researchers at the University of Notre Dame, University of Oklahoma and Virginia Tech applied radar technology like that used in meteorology to quantify the number of mayflies that emerged from two bodies of water: the Upper Mississippi River and the Western Lake Erie Basin.

Although the initial study was intended only to quantify mayfly swarms, researchers found a decrease of more than 50% in mayfly populations from 2012 to 2019 in these two water bodies. The NSF-funded results are published in the journal Proceedings of the National Academy of Sciences.

The goal of the research was to characterize the size of the swarms, using the same technique a meteorologist would use to quantify the amount of precipitation that falls from a cloud.

With radar data from the two locations over a span of eight years, the research team estimated that up to 88 billion mayflies can swarm from each location annually.

“Approximately 88 billion mayflies equate to about 12 trillion calories in the food web, feeding about 54 million baby birds,” said scientist Phillip Stepanian of the University of Notre Dame. “Therefore, we can assume these insects have a nearly instant impact on the birds that survive on them when they descend on their respective shorelines.”

Studies have suggested that declines in water quality caused by nutrient and sediment runoff, as well as warmer temperatures, may be impacting mayfly survival. Mayflies may be canaries in the coal mine, say the researchers, in that they’re sending a message about how tightly land and water are linked.

“Several recent studies striking the alarm for an ‘insect apocalypse’ are controversial because long-term, standardized data to quantify trends are in short supply,” says Dan Gruner, a program director in NSF’s Division of Environmental Biology. “This study gives us new ways to understand population trends of insects, which form the base of the food web upon which we all depend.”