Driven by Earth’s orbit, climate changes in Africa may have aided human migration 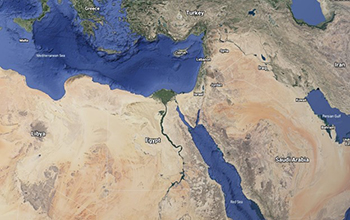 In 1961, John Kutzbach, then a recent college graduate, was stationed in France as an aviation weather forecaster for the U.S. Air Force. There, he found himself exploring the storied caves of Dordogne, including the prehistoric painted caves at Lascaux.

Thinking about the ancient people and animals who would have gathered in these caves for warmth and shelter, he became interested in glaciology. “It was interesting to me, as a weather person, that people would live so close to an ice sheet,” says Kutzbach, an emeritus atmospheric scientist at the University of Wisconsin–Madison.

Kutzbach went on to a career studying how changes in Earth’s movements through space –- the shape of its orbit, its tilt on its axis, its wobble –- and other factors, including ice cover and greenhouse gases, affect its climate. Many years after looking at Ice Age cave art, he’s trying to better understand how changes in Earth’s climate may have influenced human migration out of Africa.

In a study in the journal Proceedings of the National Academy of Sciences, Kutzbach and a team of researchers trace changes in climate and vegetation in Africa, Arabia and the Mediterranean going back 140,000 years to aid others studying the influences underlying human dispersal.

The NSF-funded study describes a climate and vegetation model that explains when regions across Africa, the Middle East, and the Mediterranean were wetter and drier, and how the plant composition changed in tandem, possibly providing migration corridors through time.