Beating the heat in the living wings of butterflies 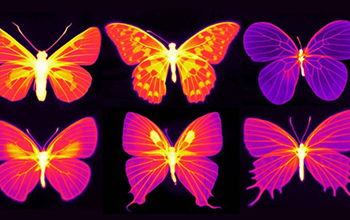 Discovery of nanostructures in wings could inspire radiative-cooling materials

The NSF-funded research has also led to the discovery that these insects regulate their wing temperatures through both structural and behavioral adaptations.

Because of their small thermal capacity, wings can overheat rapidly in the sun when butterflies cease flight, and can cool down too much during flight in a cold environment.

The study, published in the journal Nature Communications, is the first to explore the implications of temperature in shaping the wing structure and behavior of butterflies.

Through their wings, “butterflies can accurately determine the intensity and direction of sunlight, and do this swiftly without using their eyes,” says Nanfang Yu, a physicist at Columbia and co-PI of the study.

The scientists, who were co-led by Naomi Pierce of Harvard, used expertise in biology and optics. By staining the neurons found in the wings, they discovered that butterfly wings are loaded with a network of mechanical and temperature sensors.

The living tissues in the wings are actively supplied by circulatory and tracheal systems throughout a butterfly’s adult lifetime — in the case of painted lady butterflies, for example, for more than three weeks.

The researchers also discovered a “wing heart” that beats a few dozen times per minute to facilitate the flow of insect blood, or hemolymph.

“Most of the research on butterfly wings has focused on colors used in signaling between individuals,” says Pierce. “This work shows that we should reconceptualize the butterfly wing as a dynamic, living structure.”

Adds Krastan Blagoev, a program director in NSF’s Division of Physics, “Collaboration between biologists and physicists can advance our understanding of the living world. Discovering the physical principles behind biological function can lead to radically new technological innovations.”