The curious case of the disappearing snakes 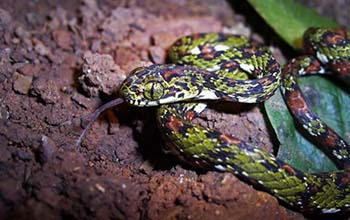 When frogs decline, snakes go with them

A new National Science Foundation-funded study sounds alarm bells about the biodiversity crisis and declining wildlife populations around the world. The results are published in the journal Science.

The loss of any species is devastating. But the decline or extinction of one species can trigger an avalanche in an ecosystem, wiping out many species in the process. When biodiversity losses cause cascading effects, they can eliminate many data-deficient species — animals that have eluded scientific study or haven’t been researched enough to understand how best to conserve them.

“Some species that are rare or hard to detect may be declining so quickly that we might not ever know we’re losing them,” said Elise Zipkin, an integrative biologist at Michigan State University, and the study’s lead author. “This study is less about snakes and more about the general loss of biodiversity and its consequences.”

The snakes in question reside in a protected area near El Copé, Panama. The study results show that the snake community began to disappear after an invasive fungal pathogen wiped out most of the area’s frogs, the snakes’ primary food source. Thanks to a long-term study by University of Maryland scientists tracking amphibians and reptiles, the team had seven years of data on the snake community before the loss of frogs, and six years of data afterward.

“We estimated an 85% probability that there are now fewer snake species than there were before the amphibians declined,” Zipkin said.

“The huge die-off of frogs is an even bigger problem than we thought,” said Doug Levey, a program director in NSF’s Division of Environmental Biology. “Frogs’ disappearance has had cascading effects in tropical food chains. This study reveals the importance of basic, long-term data. When these scientists started counting snakes in a rainforest, they had no idea what they’d eventually discover.”