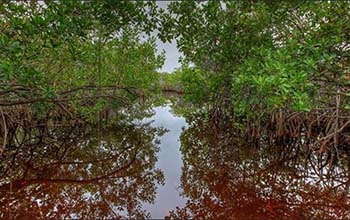 The destructive power of a hurricane appears to be good news for mangroves in the Florida Everglades.

When Category 3 hurricanes Wilma (2005) and Irma (2017) struck Florida, mangroves took a beating, especially along the state’s western coast. Many trees lost their canopies, others snapped or were uprooted. Yet more were submerged by storm surge.

But the storm surge also deposited phosphorus-rich mineral sediment from the ocean floor atop mangrove soils. The sediment increased soil phosphorus concentrations, fueling mangrove regeneration and recovery, according to a study by researchers at Florida International University and other institutions. The results are published in the journal Proceedings of the National Academy of Sciences.

“When you hear about hurricanes, it’s usually about negative impacts to the coastal landscape because of infrastructure damage and ecosystem damage,” said Edward Castañeda, an FIU researcher and the study’s lead author. “But when you dig into information going back 20 years, you realize there’s a positive side to these storms.”

With data from the Florida Coastal Everglades Long-Term Ecological Research site funded by the National Science Foundation, Castañeda and his colleagues came to the conclusion that hurricanes help mangroves increase soil elevation, and branch out and find new homes when seeds are scattered.

Mangrove forests are important parts of the Florida coastal ecosystem. They blunt the impact of hurricanes, scientists have found. They absorb damaging winds and prevent floodwaters from flowing farther inland. They store carbon that otherwise would be released into the atmosphere, and provide nurseries for fish, crab, shrimp and mollusk species that are critical in Florida’s commercial and recreational fishing industries.

“This study demonstrates the importance of a long-term perspective when assessing the impacts of large, intense disturbances such as hurricanes,” says John Schade, a program director in NSF’s Division of Environmental Biology.  “What seems like a destructive force can be an affirmation of new life when we look back from the perspective of time.”