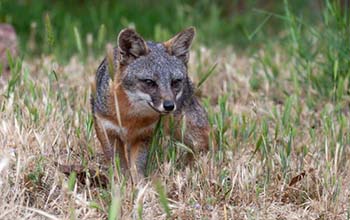 Can staph microbes lead to cancer?

Princeton University researchers funded by the National Science Foundation have shown that a shift in the microbiome — the community of microbes such as bacteria, fungi and viruses found in the body — is linked to cancer in a threatened subspecies of foxes found on one island off the California coast.

“Microbes affect animals in a number of ways including overall health,” said Jong-on Hahm, a program director in NSF’s Division of Graduate Education. NSF supported the research with a Graduate Research Fellowship — grants designed to help ensure the vitality and diversity of the U.S. scientific and engineering workforce.

“We were really excited to find such clear results,” said Princeton researcher Alexandra DeCandia, the first author on the paper. “Everything we found — reduced species diversity, shifts in community composition, overabundance of potentially pathogenic species — fit within our expectations.”

The Princeton researchers suggest the Santa Catalina foxes’ cancer results from a several-step process. First, they say, the foxes become infested with bacteria that cause ear mites, which change their microbiome and allow a staph infection to take hold.

As the bacteria, Staphylococcus pseudintermedius, run rampant, the antibiotic-resistant infection leads to chronic inflammation of the foxes’ ears. In that environment of inflamed tissue, tumors can flourish.

The researchers detailed their findings in a paper published in the journal Molecular Ecology.