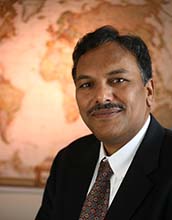 A team of Northwestern University materials science researchers has developed a new method of viewing the dynamic motion of atoms in atomically thin 2D materials.

Funded by the National Science Foundation, the imaging technique reveals the underlying cause behind the performance failure of MoS2, a 2D material originally used as a dry lubricant in greases and friction materials. MoS2 recently gained interest for its electronic and optical properties that could help researchers develop more stable and reliable materials for wearable and flexible electronic devices.

“Unfortunately, electronic devices now operate as a kind of ‘black box,'” said Vinayak Dravid of Northwestern’s McCormick School of Engineering. “Although device metrics can be measured, the motion of single atoms within the materials responsible for these properties is unknown, which greatly limits efforts to improve performance.”

“This emerging research field is likely to generate new technology industries,” said Lynnette Madsen, a program director in NSF’s Division of Materials Research. “Since the discovery of graphene, a single 2D layer of carbon atoms, other 2D layered structures are being pursued worldwide.”

The study used a high-resolution, atomic-scale imaging method called electron microscopy to observe the movement of atoms in MoS2. When the researchers applied an electric current to the material, they observed its highly mobile sulfur atoms continuously moving to vacant areas in the crystalline material, a phenomenon they dubbed “atomic dance.”

That movement created separation within the space where the material’s two crystallites meet, forming narrow channels for the electric current to travel through, reducing effectiveness.