Decarbonizing your ride for a more stable climate 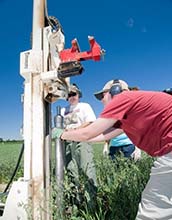 Scientists measure the climate benefits of alternatives to petroleum fuels

Transportation produces a sizable amount of greenhouse gas emissions, largely by using petroleum to power internal combustion engines. Alternatives –- for example, organic materials such as grasses to produce fuels or electricity –- could avoid petroleum use altogether.

Now, a team of scientists at the Great Lakes Bioenergy Research Center, a partnership between Michigan State University and the University of Wisconsin–Madison, has examined biofuel crops grown in Michigan and Wisconsin to test their potential to mitigate global warming when used for ethanol or electricity. The paper is published in Environmental Science and Technology.

In a field experiment at the National Science Foundation’s Kellogg Biological Station Long-Term Ecological Research site and the University of Wisconsin’s Arlington Research Station, the team measured the potential for biomass crops to mitigate climate change by powering ethanol or electric vehicles.

“This study is an important step forward in what has been a long-running debate about the potential benefits of biofuels,” said John Schade, a program director in NSF’s Division of Environmental Biology. “The results highlight how long-term fundamental research in ecosystem science can benefit society in sometimes unexpected ways.”

Before this research, scientists lacked evidence to say how much and by which means biofuels should reduce carbon emissions caused by petroleum-burning vehicles, according to Phil Robertson of MSU, senior author of the study.

“Despite being grown on very different soils and with natural climate variability, all crops we tested had a significant mitigation capacity,” said lead author Ilya Gelfand of Ben Gurion University of the Negev, Israel.