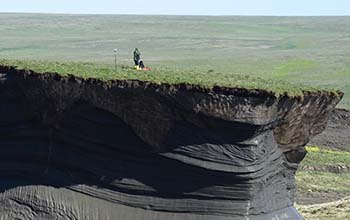 That is the conclusion of a study appearing in the journal Science that began more than 20 years ago as a query posed by Jeff Severinghaus, a geoscientist at the Scripps Institution of Oceanography. A National Science Foundation-funded research team led by the University of Rochester’s Vas Petrenko that includes Severinghaus analyzed samples of gases trapped in ice during a period of deglaciation between 18,000 and 8,000 years ago. That period is considered a partial analog for the current era of global warming.

The researchers conclude that even if methane is released from permafrost and other stores known as methane hydrates, very little actually reaches the atmosphere.

“It is a rare piece of good news about climate change,” said Severinghaus, “so I’m happy to come to the public and say this is something we don’t have to worry about.”

When plants die, they decompose into carbon-based organic matter in the soil. In extremely cold conditions, the carbon in the organic matter becomes trapped by permafrost—frozen ground–instead of being emitted into the atmosphere. Permafrost is mostly found on land, mainly in Siberia, Alaska, and Northern Canada.

Along with organic carbon, there is also an abundance of ice in permafrost. When the permafrost thaws with rising temperatures, the ice melts and the underlying soil becomes waterlogged, helping to create low-oxygen conditions. That creates an ideal environment for microbes in the soil to consume the carbon and produce methane.