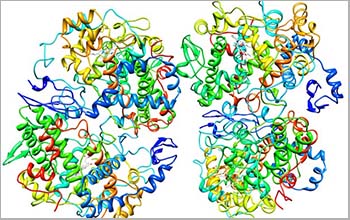 Probe may have applications in cancer therapy

Scientists have developed a probe named CoxFluor that can distinguish between Cyclooxygenase-2, an enzyme that plays a major role in driving the progression of cancer, and the enzyme Cyclooxygenase-1, which is expressed in all cells.

Led by Jefferson Chan, a chemist at the University of Illinois at Urbana-Champaign, a paper detailing the findings, “An Activity-Based Sensing Approach for the Detection of Cyclooxygenase-2 in Live Cells,” was published in Angewandte Chemie.

“One of the biggest challenges in developing probes is being able to selectively look at the enzyme in question,” Chan said. “The commercial assays that are used now work with both enzymes, which can cause significant interference.”

The National Science Foundation-funded researchers’ tests demonstrate that CoxFluor only works with COX-2 and not COX-1. “We looked at a panel of enzymes that could have interfered with CoxFluor and showed through careful characterization that there’s no cross-reactivity,” Chan said.

The researchers also are interested in using the probe as a mechanism for killing cancer cells. “The concentration we are now using does not harm the enzyme,” Chan said. “However, if we increase the concentration above a certain threshold, it could be a new mechanism for killing cancer cells. This could be a unique way to target cancer cells since we know that every cell in the body has COX-1 but COX-2 is only elevated in tumor cells.”

Added Edward Walker, a program director in NSF’s Office of Advanced Cyberinfrastructure, “A key aspect of this project is a collaboration with Emad Tajkhorshid, a biochemist and the leader of the Theoretical and Computational Biophysics Group at the Beckman Institute. Using the NSF-funded Blue Waters supercomputer system, the team was able to simulate how CoxFluor interacts with COX-2.”