How did marine animals become so diverse? 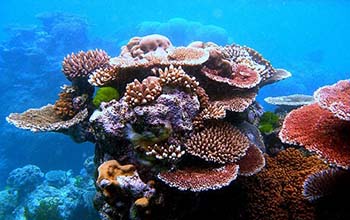 Upending an evolutionary theory proposed in the 1950s, scientists have found that the groups of animals most resistant to extinction also contain the greatest ecological diversity –- their members perform a larger number of different functions. The research, published in Science, was conducted by investigators at the University of Hawai‘i at Hilo and Stanford University.

The National Science Foundation-funded scientists examined nearly 20,000 fossil marine animal genera – groups of species – across the past 500 million years, in addition to 30,000 genera of living marine animals. The analyses show that the most ecologically diverse animal groups contain a majority of the genera in the modern oceans.

This close link between species richness and functional differentiation was not always the case in marine ecosystems.  For much of the first 300 million years of animal evolution in the sea, the most diverse groups were those with the highest rates of species formation. They did not necessarily have a higher number of different ecosystem functions than did less diverse groups, however.

It was only after ancient mass extinction events that the current associations developed, a fact that could only be determined through examination of the fossil record.

The study shows that the slow and steady development of lineages through time has been a key factor in which groups have achieved the highest diversity.