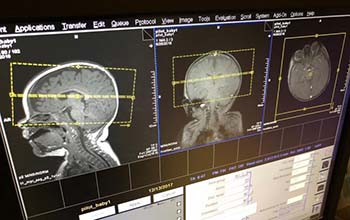 Within hours of birth, a baby’s gaze is drawn to faces. Now, brain scans of newborns reveal the neurobiology underlying this behavior; in babies as young as 6 days, brains appear to be hardwired for the specialized tasks of seeing faces and seeing places.

The research was conducted by psychologists at Emory University, and the findings are published in the Proceedings of the National Academy of Sciences. Their work provides the earliest peek yet into the visual cortex of newborns, using harmless functional magnetic resonance imaging, fMRI, and shedding new light on the question of how humans process information.

“We’ve shown that a baby’s brain is more adult-like than many people might assume. Much of the scaffolding for the human visual cortex is already in place, along with the patterns of brain activity,” says Frederik Kamps, who led the study.

Understanding how an infant’s brain is typically organized may help answer questions when something goes awry, says the paper’s senior author, Daniel Dilks. “For example, if the face network in a newborn’s visual cortex was not well-connected, that might be a biomarker for disorders associated with an aversion to eye contact. By diagnosing the problem earlier, we could intervene earlier and take advantage of the incredible malleability of the infant brain.”

The average age of the participants in this study was 27 days, to better understand whether the differentiation in brain regions is innate or molded by experience.

“Getting fMRI data from a newborn is a new frontier in neuroimaging,” Kamps says. Dilks’ lab is a leader in adapting fMRI technology to make it baby friendly. The results showed that the babies’ patterns of brain activity were similar to those of adults, although not quite as strong. “That finding suggest that there is room for these networks to keep getting fine-tuned as infants mature into adulthood,” Kamps says.