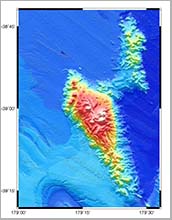 Where one tectonic plate dives beneath another, the world’s largest earthquakes occur

Subduction zones — places where one tectonic plate dives beneath another — are where the world’s largest and most damaging earthquakes occur. A new study has found that when underwater mountains, also known as seamounts, are pulled into subduction zones, not only do they set the stage for these powerful quakes, they also create conditions that end up dampening them.

The National Science Foundation-funded findings mean that scientists should more carefully monitor areas around a subducting seamount. The practice could help researchers better understand and predict where future such earthquakes are most likely to occur.

The researchers used a computer model to simulate what happens when seamounts enter ocean trenches. According to the model, when a seamount sinks into a trench, “the Earth ahead of the subducting seamount becomes brittle, favoring powerful earthquakes, while the material behind it remains soft and weak, allowing stress to be released more gently,” said co-author Demian Saffer, director of the University of Texas Institute for Geophysics.

The study was published in Nature Geoscience and was led by Tian Sun, who is currently a research scientist at the Geological Survey of Canada. Other co-authors include Susan Ellis, a scientist at the New Zealand research institute GNS Science. Saffer supervised the project.

The researchers used a computer model to simulate what happens when seamounts enter ocean trenches. According to the model, when a seamount sinks into a trench, the ground ahead of it becomes brittle, as its slow advance squeezes out water and compacts the Earth.

The hard, brittle rock can be a source of powerful earthquakes, as forces generated by the subducting plate build up — but the weakened, wet material behind the seamount creates an opposite, dampening effect on these quakes and tremors.

The study was conducted as part of an International Ocean Discovery Program expedition.

“Because subduction zone earthquakes can be so hazardous, yet are so hard to forecast, internationally collaborative work like this is essential to our understanding,” said Jennifer Wade, a program director in NSF’s Division of Earth Sciences.