How will billions of marine microbes adapt to climate change? A new study investigates 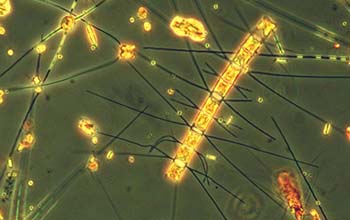 Climate change is heating the oceans, affecting billions of marine microbes in ways scientists don’t fully understand. In response, USC researchers have developed a model to forecast how these important organisms will adapt to warming seas. The research is funded by the National Science Foundation.

Oceans shape life and climate on Earth. Marine microorganisms are responsible for producing half the oxygen we breathe. The oceans sequester vast amounts of carbon dioxide from the atmosphere — taking up about 30% of human-derived CO2. Fisheries, which are supported by marine microorganisms, contribute to food and income for about 820 million people worldwide.

These vital tasks are accomplished by plants and animals so small that thousands could swim in a teaspoonful of water. What Earth will look like in 50 to 100 years depends on how these tiny creatures respond to a changing climate.

“Microorganisms are critical to life on earth,” said Naomi Levine, a biological oceanographer at USC and senior author of a new study on the microbes. “The oceans are changing, but we don’t know what future ocean ecosystems will look like because we don’t know how these organisms will respond.”

Researchers at USC — in collaboration with scientists at the University of Edinburgh and other institutions — developed a model to estimate how the microbes, using a variety of evolutionary strategies, will adapt.

Ocean ecosystems are challenging to predict at the level of microscopic organisms, scientists say. This new model provides a framework that can be used to understand the adaptation of ocean microorganisms to numerous variables, including human-derived changes in marine environments.

The results are published in Proceedings of the Natural Academy of Sciences.