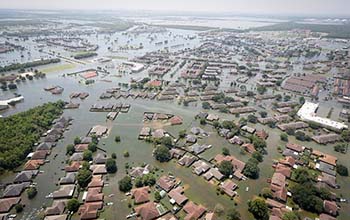 By incorporating the architecture of city drainage systems and readings from flood gauges into a comprehensive statistical framework, researchers at Texas A&M University can now accurately predict the evolution of floods in extreme situations such as hurricanes.

With the new National Science Foundation-funded approach, the researchers said their algorithm could forecast the flow of floodwater in almost real-time, which can lead to more timely emergency response and planning.

“Not knowing where floodwater will flow next is particularly detrimental for first responders who need to gauge the level of flooding for their rescue operations,” said Ali Mostafavi of Texas A&M. “Our new algorithm considers underground drainage channels to provide an accurate representation of how floods propagate. This tool, we think, can vastly help disaster management because first responders will be able to see which way floodwater will flow in real-time.”

Hurricanes are notorious for wreaking havoc on shorelines, toppling trees, tearing down power lines and above all, causing severe floods. Conventionally, scientists have used physics-based models to predict where water might collect, overflow and cause flooding.

These models capture how physical features of Earth’s surface and urban landscapes affect the flow of water. However, while good at predicting when and where floods will happen under most rainfall conditions, these traditional models do not perform as well at predicting floods during incidents of torrential rainfall, such as during Hurricane Harvey, Mostafavi said.

“Physics-based models offer one perspective on how floods can spread, which is extremely useful, but the picture they provide is somewhat incomplete,” he said. “We wanted to use existing data on how past floods have spread through drainage channels to develop a model that would be able to predict, within a certain level of preciseness, how future floods will spread.”

The research was published in the journal Computer-Aided Civil and Infrastructure Engineering.

“Mostafavi is not just applying known techniques,” said Jacqueline Meszaros, a program director in NSF’s Directorate for Engineering.  “He’s making breakthroughs in network modeling because he is inspired to help solve a real-world problem. Many fundamental scientists and engineers make progress like this because they want to contribute to the greater good.”