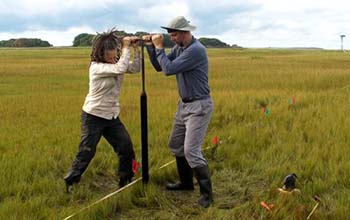 During the 18th century, sea levels along a stretch of the Atlantic coast of North America rose almost as fast as they did during the 20th century, reveals a new study by researchers at the Woods Hole Oceanographic Institution and their colleagues.

The findings, funded in part by the National Science Foundation and published in the journal Geophysical Research Letters, found evidence of a decades-long period of enhanced pre-industrial sea level rise of about two to three millimeters per year in Nova Scotia, Maine and Connecticut.

That’s only slightly slower than rates of change in these locations during the 20th century, which were faster than any other century in at least the last 3,000 years. The new findings are based on salt marsh sediments from the Atlantic coast and from microscopic salt marsh fossils, which act as “archives” of past sea levels going back hundreds of years.

The researchers say that the large rates of sea level rise at these locations during the 18th century were natural and partly related to the North Atlantic Oscillation — a large-scale atmospheric pressure see-saw over the North Atlantic region — and to periods of enhanced ice melt in the Arctic.

“One of the big goals in sea level research is to say how much of the sea level changes we’re seeing today are due to human actions or are caused by natural processes,” says Christopher Piecuch, a physical oceanographer at Woods Hole and a coauthor of the paper. “Our study takes an important step in that direction and helps put present-day sea level change more clearly into a longer-term geological context.”

Previous studies showed that, since the 1950s, rates of sea level rise along the Atlantic coast have been increasing more than the global average. The new research shows that such periods of enhanced sea level rise, lasting for multiple decades at a time, can occur for reasons unrelated to human influences.

“This research demonstrates the need for studying global ocean processes to explain local phenomena such as sea level rise, and to plan appropriately,” says George Voulgaris, a program director in NSF’s Division of Ocean Sciences.