Earth’s mantle, not its core, may have generated planet’s early magnetic field 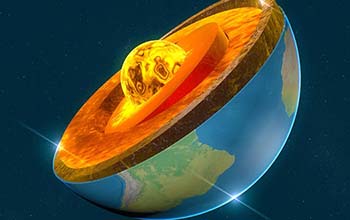 Researchers’ findings could change how Earth’s history is understood

New research lends credence to an unorthodox retelling of the story of early Earth that was first proposed by a geophysicist at the Scripps Institution of Oceanography in La Jolla, California.

In a study appearing in the journal Earth and Planetary Science Letters, researchers Dave Stegman, Leah Ziegler and Nicolas Blanc provide new estimates of the thermodynamics of magnetic field generation in the liquid portion of early Earth’s mantle, and show how long that field was available.

The National Science Foundation-funded research provides a “door-opening opportunity” to resolving inconsistencies in the narrative of the planet’s early days.

“Currently we have no grand unifying theory for how Earth evolved thermally,” Stegman said. “We don’t have a conceptual framework for understanding the planet’s evolution. This is one viable hypothesis.”

The study is one of the latest developments in a paradigm shift that could change how Earth’s history is understood.

It has been a bedrock tenet of geophysics that Earth’s liquid outer core has always been the source of the dynamo that generates its magnetic field. Magnetic fields form on Earth and other planets that have liquid, metallic cores, rotate rapidly, and experience conditions that make the convection of heat possible.

In 2007, researchers in France proposed a radical departure from the long-held assumption that the Earth’s mantle has remained entirely solid since the very beginnings of the planet. They argued that during the first half of the planet’s 4.5-billion-year history, the bottom third of Earth’s mantle would have been molten, which they call “the basal magma ocean.”

Six years later, Stegman and Ziegler expanded on that idea, publishing the first work showing how this once-liquid portion of the lower mantle, rather than the core, could have exceeded the thresholds needed to create Earth’s magnetic field during that time. This study is a next step in their work.