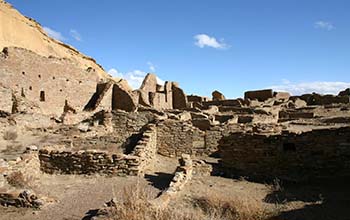 A majestic ponderosa pine, standing tall in what is widely thought to have been the “center of the world” for the ancestral Puebloan people, may have more mundane origins than previously believed, according to research led by scientists at the University of Arizona.

A National Science Foundation-funded study published in the journal American Antiquity provides new data that call into question the long-held view of the Plaza Tree of Pueblo Bonito as the sole living tree in an otherwise treeless landscape, around which a regional metropolis in New Mexico’s Chaco Canyon was built.

Combining various lines of evidence, the study is the first to apply a technique called dendroprovenance to a sample of the plaza tree that uses tree-ring growth patterns to trace the tree’s origin. The data revealed that the tree did not grow where it was found, and is therefore unlikely to have played a role as significant as various authors have ascribed to it since it was discovered in 1924.

According to the study’s first author, Christopher Guiterman, “the tree goes back all the way to the birth of tree-ring science – a supposedly living tree growing in ‘downtown Chaco’ during the height of its occupancy – which would make it the only tree of its kind that we know of in southwestern archaeology.

“The likelihood of finding such a tree lying undisturbed for 800-plus years seems unbelievable, but we know that’s what happened because tree rings don’t lie.”