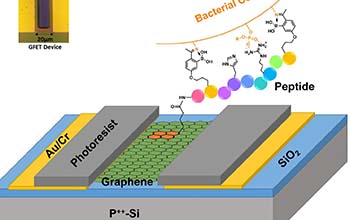 Using a single atom-thick sheet of graphene to track the electric signals inherent in biological structures, a team led by Boston College researchers has developed a platform to selectively identify deadly strains of bacteria. The advance could lead to more accurate targeting of infections with appropriate antibiotics, scientists reported in the journal Biosensors and Bioelectronics.

The National Science Foundation-funded prototype demonstrates the first selective, rapid, and inexpensive electrical detection of the pathogenic bacteria species Staphylococcus aureus and antibiotic resistant species Acinetobacter baumannii on a single platform, according to physicist Kenneth Burch, a lead author of the paper.

The rapid increase in antibiotic resistant bacteria has become a global threat, in part because of the over-prescription of antibiotics. That’s driven largely by the lack of fast, cheap, scalable, and accurate diagnostics, according to co-author and biologist Tim van Opijnen.

Particularly crucial is identifying the species of bacteria and its resistance to antibiotics — and doing so in a platform that can be easily operated at points of care. Currently such diagnostics are relatively slow, taking from hours to days and requiring extensive expertise and expensive equipment.

The Boston College researchers, working with colleagues from Boston University, developed a sensor, known as a graphene field effect transistor, that can overcome the critical shortcomings of prior detection efforts. It is a scalable platform that employs peptides — chains of multiple linked amino acids — which are inexpensive and easy-to-use chemical agents, according to co-author and Boston College chemist Jianmin Gao.

“This novel application of graphene allows detection of pathogenic bacteria, helping us fight the critical problem of antibiotic resistance,” says Tomasz Durakiewicz, a program director in NSF’s Division of Materials Research. “The work is an impactful example of the translation of NSF-funded fundamental research to applications.”

The U.S. Department of Energy also funded the study.