‘Sushi parasites’ have increased 283-fold in past 40 years 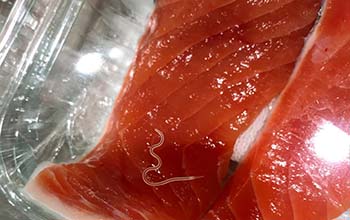 The next time you eat sashimi, nigiri or other forms of raw fish, consider doing a quick check for worms, say National Science Foundation-funded scientists.

A new study led by University of Washington researchers finds dramatic increases in the abundance of a worm that can be transmitted to humans who eat raw or undercooked seafood. The worm’s 283-fold increase since the 1970s could have implications for the health of humans and marine mammals, which can inadvertently eat the worm.

Thousands of papers have looked at the abundance of this parasitic worm, known as Anisakis, or “the herring worm,” in particular places and at particular times. But this is the first study to combine the results of those papers to investigate how the global abundance of the worm has changed through time. The findings were published in the journal Global Change Biology.

“This study harnesses the power of many studies to show a global picture of change over a nearly four-decade period,” said corresponding author Chelsea Wood of the University of Washington. “It shows that risks to humans and marine mammals are changing over time. That’s important to know from a public health standpoint, and for understanding what may be going on with marine mammal populations that aren’t thriving.”

Despite their name, herring worms can be found in a variety of marine fish and squid species. When people eat live herring worms, the parasite can invade the intestinal wall and cause symptoms that mimic those of food poisoning. In most cases, the worm dies after a few days and the symptoms disappear. The disease, called anisakiasis or anisakidosis, is rarely diagnosed because most people assume they’ve suffered a bad case of food poisoning.

“Although most cases of anisakiasis resolve without treatment, serious complications can occur and sometimes endoscopic surgery is required,” says Dan Thornhill, a program director in NSF’s Division of Ocean Sciences. “This study documents a staggering increase in the foodborne parasites responsible for anisakiasis. The results highlight the need for greater public awareness as well as the importance of adequately cooking seafood to kill parasites.”