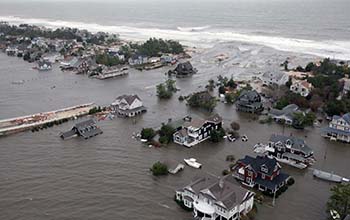 Researchers can better quantify range of impacts from landfalling storms

What if Hurricane Sandy had dealt New Jersey a glancing blow in 2012 instead of hitting it nearly head on? Or if the historic storm had made landfall farther south or north? What if the storm was smaller, slower, or more intense? How would the impacts change?

It’s a challenge to answer these questions with widely used weather models such as the Weather Research and Forecasting model, based at the National Center for Atmospheric Research. While models such as the WRF can simulate hurricanes in detail, they are primarily designed to give the best possible prediction of a hurricane’s track and evolution given the current conditions in the model, not to answer what-if scenarios. As a result, scientists have very little control over how the storms in the model propagate.

A new tool developed by NCAR scientists is changing that. The Hybrid WRF Cyclone Model, HWCM, allows scientists to create an idealized storm (prescribing storm characteristics such as size and intensity), precisely place that storm where they want it, and then steer the storm toward land, giving them a much greater degree of control over how and where the simulated hurricane makes landfall.

The research team recently described the new modeling capability in the journal Weather and Climate Extremes. The development of HWCM was supported by the National Science Foundation, NCAR’s sponsor, and by the Insurance Australia Group Limited.

This ability to steer storms allows researchers to characterize a range of possible impacts from a landfalling hurricane at a particular location. Using HWCM, scientists can subject the same location to storms coming from many different angles, which can significantly affect storm surge, as well as a range of storm sizes, intensities, and forward speeds. Together, these simulations can better characterize the possible risks to coastal communities.