Coral tells a tale of El Niño’s past 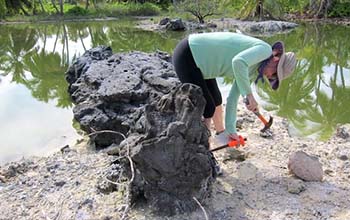 There’s no longer a need to guess what ocean temperatures were like in the remote tropical Pacific hundreds of years ago. The ancient coral that lived there tells the tale, say National Science Foundation-funded researchers.

A study in Science led by Rice University and Georgia Tech investigators parses the record archived by ancient tropical Pacific coral over the past millennium. That record could help scientists refine their models of how changing conditions in the Pacific, particularly from volcanic eruptions, influence the occurrence of El Niño events.

The researchers found that the ratio of oxygen isotopes incorporated into coral, an accurate measure of historic ocean temperatures, shows no correlation between El Niño and estimates of sulfate particles ejected into the atmosphere by tropical volcanic eruptions. The result could be of interest to those who suggest that seeding the atmosphere with sun-blocking particles may help reverse global warming.

The ability to analyze climate conditions based on oxygen isotopes trapped in fossil corals extends the climatological record in this region across more than 20 ancient eruptions. Dee said this allows for a more rigorous test of the connection.

Georgia Tech climate scientist Kim Cobb and her team collected data on trips to the Pacific that show little connection between known volcanoes and El Niño events over time. Like tree rings, these paleoclimate archives hold chemical indicators of oceanic conditions when they formed. They allow researchers to examine how natural factors may have driven changes in El Niño events, and how these events may have changed conditions throughout the tropics. The new coral data suggest that volcanic eruptions are not strong drivers of El Niño events.

“Fossil coral offers a glimpse into past environmental conditions at an amazing monthly resolution,” says Steve Hovan, a program director in NSF’s Division of Ocean Sciences.  “Coral data now enable us to track El Niño in the central tropical Pacific through much of the last millennium in unprecedented detail. That will allow scientists to improve predictions of how the El Niño-Southern Oscillation may respond to natural and human factors in the decades ahead.”