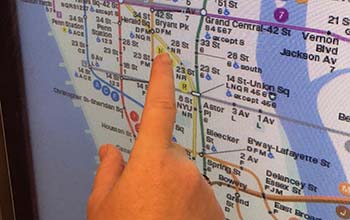 Researchers in New York City are collecting detailed 3D data on human movements and behaviors — particularly around medical facilities, public transportation systems, and other essential services — to document the complex landscape of “surface vectors” and thus opportunities for COVID-19 transmission.

Working under a National Science Foundation Rapid Response Research (RAPID) grant, a team from New York University is advancing epidemiological analysis beyond the concept that has been in use since 1854, when John Snow first mapped cholera cases to identify contaminated wells as the infection sources of a local outbreak in London.

Rapid documentation and mapping of current conditions around medical and transport facilities will make it possible to investigate the implementation of social distancing regulations and predict patterns of exposure and transmission, the NSF-funded researchers say.

The first-of-its-kind study is laying the groundwork to build machine learning models to speed the analysis of how a virus spreads in urban areas — not just in New York, but across the United States and beyond. The scientists are pioneering a new way of thinking and documenting transmission locations. “This project will help us better understand the transmission of viruses based on the movement and interactions of people in their environment,” says Scott Freundschuh, a program director in NSF’s Division of Behavioral and Cognitive Sciences.

This type of documentation and modeling could be applied to airports, grocery stores, and playgrounds — anywhere large groups of people touch things then leave.

“These scientists are documenting citizens’ use of public transportation in New York City, when they leave a healthcare facility, what they touch with their hands (such as handrails), the length of time the touch occurs, and what parts of their hands are in contact with objects,” Freundschuh says.