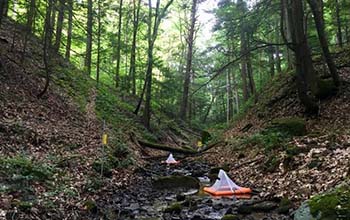 Since the 1980s, a sprawling mountaintop removal mining complex in southern West Virginia has been leaching pollutants — such as selenium — into nearby streams at levels deemed unsafe for aquatic life.

Now, even though the mine is closed, National Science Foundation-funded researchers have found high concentrations of selenium in stream insects and the spiders that eat them, an indication that the contaminant moves from water to land as it makes its way up the food chain.

Duke University researchers looked at 23 streams in the Mud River watershed, a network of creeks and streams meandering through the steep forested terrain in Lincoln County, West Virginia. The watershed also drains the 9,900-acre Hobet 21 coal mine, one of the largest mountaintop removal mining operations in Appalachia.

For three decades until its closure in 2015, the mining operation blasted the tops off mountains to get at the coal beneath and pushed the leftover rock into neighboring valleys, burying streams under hundreds of feet of rubble.

The water runoff from this mining waste contains naturally occurring trace elements such as selenium and other dissolved substances. The new study, published in the journal Environmental Science & Technology, looked at how selenium moves through food webs once it gets in the water.

Stream insects from mined sites had selenium concentrations that were five times higher than at other sites.

Selenium concentrations in insects and their spider predators from mined streams were as high as 95 and 26 parts per million, respectively — too high to be considered safe for birds to eat, and some of the highest levels recorded in animal tissues.

“This study shows that pollutants reaching our waterways continue to pose significant risks to the health of humans and other animals, and to the environment,” says Ingrid Padilla, a program director in NSF’s Division of Earth Sciences.