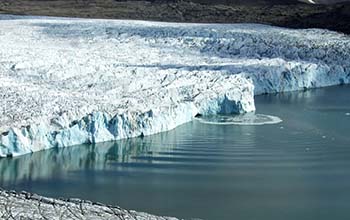 Researchers at the Scripps Institution of Oceanography are eavesdropping on an Arctic glacier in the name of science. In a new study, scientists Oskar Glowacki and Grant Deane describe a method of measuring glacier mass loss from iceberg calving, a process in which ice breaks off from the edges of a glacier and ultimately contributes to sea level rise. The researchers are analyzing underwater acoustic recordings of icebergs as they fall into the ocean and make a splash.

As the planet warms, calving is expected to increase, but accurate estimates of ice loss at the ice-ocean boundary are hard to obtain, say the researchers. This difficulty is due to the remote locations of many glaciers, as well as the dangerous conditions that prevent scientists from making direct measurements at unstable ice cliffs.

To address these challenges, the National Science Foundation-funded team deployed two underwater microphones, or hydrophones, near the Hansbreen Glacier in Hornsund Fjord, Svalbard, an Arctic archipelago north of Norway. Divers placed the hydrophones on the ocean floor more than 900 meters (almost 3,000 feet) from the glacier cliff. Over the course of a month and a half, the hydrophones captured the sounds made by icebergs falling into the ocean.

The underwater sound recordings allowed the researchers to derive a mathematical formula that calculates the mass of the ice block from the noise it makes. This model can be used to measure ice loss due to calving.

What does iceberg calving sound like? “An iceberg breaking off an ice cliff and falling into the water sounds like a cracking, rumbling splash,” said Deane. “It has a real bass feel to it.” (Listen to a sample here.)