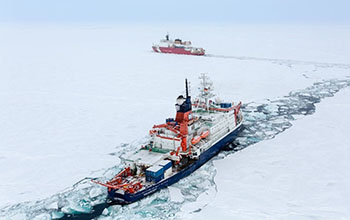 A new study by National Science Foundation-funded researchers at the Woods Hole Oceanographic Institution and their colleagues found that freshwater runoff from rivers and continental shelf sediments is bringing significant quantities of carbon and trace elements, which form essential building blocks for ocean life, into parts of the Arctic Ocean via the Transpolar Drift. This major surface current moves water from Siberia across the North Pole to the North Atlantic Ocean.

Oceanographers conducting research in the Arctic Ocean as part of the international GEOTRACES program found much higher concentrations of trace elements in surface waters near the North Pole than in regions on either side of the current. The results are published in the Journal of Geophysical Research-Oceans.

“Many important trace elements that enter the ocean from rivers and shelf sediments are quickly removed from the water column,” says WHOI marine chemist Matthew Charette, lead author of the study. “But in the Arctic, they are bound with abundant organic matter from rivers, which allows the mixture to be transported into the central Arctic, more than 1,000 kilometers [621 miles] from their source.”

Trace elements, such as iron, form essential building blocks for ocean life. As the Arctic warms and larger swaths of its ocean become ice-free for longer periods of time, marine algae are becoming more productive. A greater abundance of trace elements coming from rivers and shelf sediments can lead to increases in nutrients reaching the central Arctic Ocean, further fueling algae production.

“It’s difficult to say exactly what changes this might bring,” says Charette, “but we do know that the structure of marine ecosystems is set by nutrient availability.”

Nutrients fuel the growth of phytoplankton, microscopic algae that form the base of the marine food web. More phytoplankton bring more zooplankton — small fish and crustaceans, which can then be eaten by animals like seals and whales.

“The Arctic Ocean has been, and continues to be, one of the most rapidly changing areas on the planet,” says Hedy Edmonds, a program director in NSF’s Directorate for Geosciences, which funded the research through its Division of Ocean Sciences and Office of Polar Programs. “It’s imperative that we and our international partners continue to document these changes to better understand our future.”