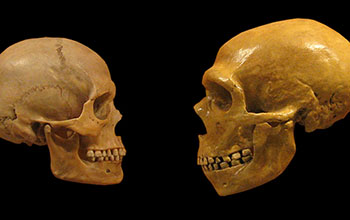 A new study, supported by the National Science Foundation, is noteworthy because it has uncovered evidence that people in Eurasia today have genetic material linked to Neanderthals from the Altai mountains in modern-day Siberia.

The results reinforce the concept that Neanderthal DNA has been woven into the modern human genome on multiple occasions as our ancestors met Neanderthals time and again in different parts of the world.

The study is published in the journal Genetics.

“It’s not a single introgression of genetic material from Neanderthals,” says lead researcher Omer Gokcumen, a University at Buffalo biologist. “It’s just this spider web of interactions that happen over and over again. The ancestors of modern humans in Africa start expanding in population, and as they expand their range, they meet with these other hominins and absorb their DNA, if you will,” Gokcumen says. “We probably met different Neanderthal populations at different times in our expansion into other parts of the globe.”

To complete the project, scientists analyzed the DNA of hundreds of people of Eurasian ancestry.

“It seems like the story of human evolution is not so much like a tree with branches that just grow in different directions. It turns out that the branches have all these connections between them,” Gokcumen says. “Every new genome that’s sequenced in the future may completely change the story again.”