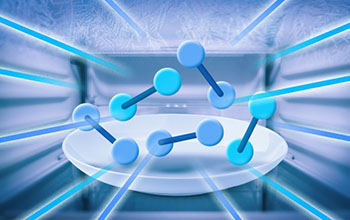 For years, scientists have looked for ways to cool molecules to ultracold temperatures, at which point the molecules should slow to a crawl, allowing scientists to precisely control their quantum behavior. This could enable researchers to use molecules as complex bits for quantum computing, tuning individual molecules like tiny knobs to carry out multiple streams of calculations at a time.

While scientists have super-cooled atoms, doing the same for molecules, which are more complex in their behavior and structure, has proven to be a much bigger challenge.

Now MIT physicists have found a way to cool molecules of sodium-lithium down to 200 billionths of a Kelvin, just a hair above absolute zero. They did so by applying a technique called collisional cooling, in which they immersed molecules of cold sodium-lithium in a cloud of even colder sodium atoms. The ultracold atoms acted as a refrigerant to cool the molecules even further.

Their findings, published in the journal Nature, mark the first time researchers have successfully used collisional cooling to cool molecules down to nano-Kelvin temperatures. The National Science Foundation provided funding for the research.

Collisional cooling is a standard technique used to cool atoms by using other, colder atoms. For more than a decade, researchers have attempted to super-cool a number of different molecules using collisional cooling, only to find that when molecules collided with atoms, they exchanged energy in such a way that the molecules were heated or destroyed in the process, called “bad” collisions.

In their experiments, the MIT researchers found that if sodium-lithium molecules and sodium atoms were made to spin in the same way, they could avoid self-destructing, and instead engaged in “good” collisions where the atoms took away the molecules’ energy, in the form of heat.  The team used precise control of magnetic fields and an intricate system of lasers to choreograph the spin and the rotational motion of the molecules. As result, the atom-molecule mixture had a high ratio of good-to-bad collisions and was cooled from 2 micro-Kelvin to 220 nano-Kelvin.

“Collisional cooling has been the workhorse for cooling atoms,” said MIT professor and Nobel laureate Wolfgang Ketterle. “I wasn’t convinced that our scheme would work, but since we didn’t know for sure, we had to try it. We know now that it works for cooling sodium-lithium molecules.  Whether it will work for other classes of molecules remains to be seen.”

John Gillaspy, a program officer in NSF’s Division of Physics, adds, “This is the kind of basic research that we think will lead to new tools for controlling the physical world in ways that will enable technologies of the future.”