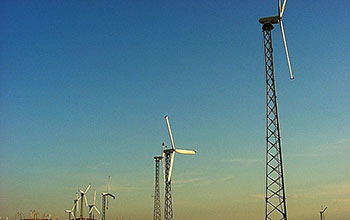 Wind power surged worldwide in 2019, but will that trend continue? More than 340,000 wind turbines generated more than 591 gigawatts globally. In the U.S., wind powered the equivalent of 32 million homes and sustained 500 U.S. factories. Wind power grew by 19 percent, thanks to booming offshore and onshore projects.

A study by National Science Foundation-funded Cornell University researchers used computers at the Texas Advanced Computing Center and other locations to find ways to make an even bigger jump in wind power capacity in the U.S.

“This research is the first detailed study designed to develop scenarios for how wind energy can expand from the current levels of seven percent of the U.S. electricity supply to achieve the 20 percent by 2030 goal outlined by the U.S. Department of Energy National Renewable Energy Laboratory,” said study co-author Sara Pryor of Cornell.

The study investigated plausible scenarios for how the expansion of wind turbines can be achieved without the use of additional land. The results showed that the U.S. could double or even quadruple the capacity with little change to system-wide efficiency. The additional capacity would make very small impacts on local climate. These results would be achieved in part by deploying next-generation, larger wind turbines.

The research focused on the potential pitfalls of whether adding more turbines in an area might decrease their output or disrupt the local climate, a phenomenon caused by what’s referred to as ‘wind turbine wakes.’ Like the water wakes that motorboats create, wind turbines create wakes of slower, choppy air.

“Using scenarios, we can assess how much power would be generated in each situation,” Pryor said.

The needed simulations are computationally demanding. “Our analyses were all performed on the XSEDE Jetstream resource using parallel processing and big data analytics in MATLAB,” Pryor added. The Extreme Science and Engineering Discovery Environment awards these supercomputer resources and expertise to researchers and is funded by NSF.

“These exciting research results demonstrate the ability of these resources to enable advances in science and engineering of great benefit to the nation,” said Manish Parashar, director of NSF’s Office of Advanced Cyberinfrastructure.