Wallflowers could lead to new drugs 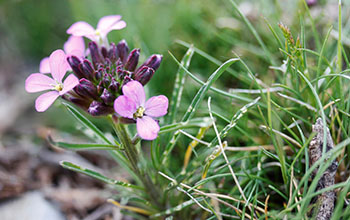 Plant-derived chemicals have long been used to treat disease

Plant-derived chemicals called cardenolides have long been used to treat heart disease and have shown potential as cancer therapies. But the compounds are toxic, making it difficult for doctors to prescribe a dose that works without harming a patient.

For decades, researchers have longed to figure out how plants biosynthesize cardenolides, knowledge that could help them discover and develop safer versions of the drugs. Unfortunately, cardenolides’ best-known plant sources — foxglove and milkweed — are not amenable to experimental techniques for identifying the genes and enzymes involved in producing the chemicals.

In a National Science Foundation-funded study published in eLife, a team led by Boyce Thompson Institute biologist Georg Jander showed that Erysimum cheiranthoides (wormseed wallflower) could be used as a model species to uncover that information. The team identified 95 candidate cardenolides and has begun using the plant to investigate cardenolide biosynthesis.

“Twelve different plant families produce cardenolides, but no one knows exactly how they make them,” Jander said. “I was looking for the best plant to study this pathway and settled on wormseed wallflower.”

The species is a good model for genetic studies, he said, because it has a short life cycle. “We need a plant that reproduces and gives us seeds quickly, which E. cheiranthoides does in about 10 weeks.”

The team assembled the complete genome of the wormseed wallflower and sequenced more than 9,000 expressed genes from E. cheiranthoides and 47 other Erysimum species. The results provide a foundation for identifying the genes that encode enzymes involved in the biosynthesis of cardenolides.

The team is now conducting studies in E. cheiranthoides to find the entire cardenolide biosynthetic pathway. “Ultimately the genes underlying the biosynthetic pathway could be inserted into bacteria or yeast, which would be used to manufacture heart and cancer medicines that are safer than what are currently available,” said Jander.

Added Diane Okamuro, a program director in NSF’s Division of Integrative Organismal Systems, “This project was funded by NSF’s Enabling Discovery through Genomic Tools program. It illustrates the potential impact of sequencing resources and functional genomics tools on the bioeconomy.”