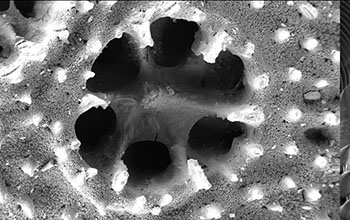 Researchers at the Scripps Institution of Oceanography and Jacobs School of Engineering at the University of California, San Diego and their colleagues have designed 3D printed, coral-inspired structures capable of growing dense populations of microscopic algae.

The National Science Foundation-funded work, published in the journal Nature Communications, could lead to compact, more efficient bioreactors for producing algae-based biofuels. It could also help researchers better understand the intricate biology of the coral-algae relationship and develop new techniques to repair and restore coral reefs.

In laboratory settings, the printed coral structures were used as platforms to grow two species of microalgae, which rapidly increased to 100 times greater density than in liquid cultures. The species were Marinichlorella kaistiae, which has commercial potential, and Symbiodinium sp., the algae that lives in association with corals in the wild.

“Corals are one of the most efficient organisms at using, capturing and converting light to generate energy,” said lead author Daniel Wangpraseurt. “And they do so in extreme environments, where light is fluctuating and there’s limited space to grow. Our goal here was to use corals as inspiration to develop more productive techniques for growing microalgae as a form of sustainable energy.”

To build the coral structures, Wangpraseurt teamed up with UC San Diego nanoengineer Shaochen Chen, who specializes in rapid 3D bioprinting technology capable of reproducing detailed structures that mimic the complex designs and functions of living tissues. The method can print structures with micrometer-scale resolution in just minutes.

Wangpraseurt also worked with researchers at Scripps to measure the photosynthetic activity of the corals in both liquid cultures and in coral models. The scientists looked at how the algae grew on the structures, and at ways to maximize the growth on the “mimic” corals.

The 3D printed corals are built to capture and scatter light more efficiently than natural corals. They consist of cup-shaped, artificial skeletons that support coral-like tissue.

Three-dimensional printing enables complex, multi-material structures that can be designed for specific functions. Coral structures are 3D-bioprinted to grow algae, which serve as biofuels, an alternate energy source.