10 years later: What did scientists learn from the Deepwater Horizon oil spill? 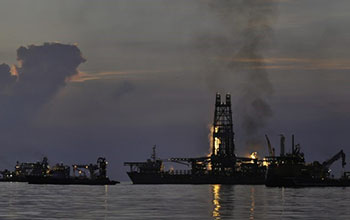 Paper reviews major findings, technological advances that could help in next deep-sea spill

Ten years ago, a powerful explosion destroyed an oil rig in the Gulf of Mexico, killing 11 workers and injuring 17 others. Over a span of 87 days, the Deepwater Horizon well released an estimated 168 million gallons of oil and 45 million gallons of natural gas into the ocean, making it the largest accidental marine spill in history.

National Science Foundation-funded researchers at the Woods Hole Oceanographic Institution and other institutions quickly mobilized to study the unprecedented spill, investigating its effects on the seafloor and deep-sea corals, and tracking dispersants used to clean up the spill.

In a paper published in the journal Nature Reviews Earth & Environment, WHOI marine geochemists Elizabeth Kujawinski and Christopher Reddy review what they — and their science colleagues around the world — have learned from studying the spill over the past decade.

“So many lessons were learned during the Deepwater Horizon disaster that it seemed appropriate and timely to consider those lessons in a review,” says Kujawinski. “We found that much good work had been done on oil weathering and oil degradation by microbes, with significant implications for future research and response activities.”

Adds Reddy, “One of the big takeaways is that the oil doesn’t just float and hang around. A huge amount of oil that didn’t evaporate was pummeled by sunlight, changing its chemistry. That’s something that wasn’t seen before, so now we have insight into this process.”

“I think the biggest unknowns still center on the impact of dispersants on oil distribution in seawater and their role in promoting — or inhibiting — microbial degradation of the spilled oil,” says Kujawinski, whose lab was the first to identify the chemical signature of the dispersants, making it possible to track them in the marine environment.

“Now we have a better sense of what we need to know,” Kujawinski says. “Understanding what these environments look like in their natural state is really critical to understanding the impact of oil spill conditions.”