Genomes of 5 cotton species could lead to better varieties 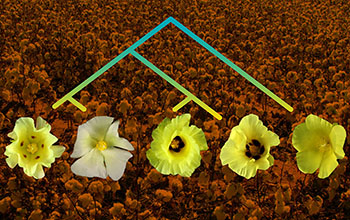 Cotton producers in the U.S. and around the world looking for new varieties

Cotton producers in the U.S. and around the world are looking for new varieties that can better withstand droughts, pests, and pathogens while yielding high-quality fibers for the textile industry.

To help accelerate the breeding and improvement of cotton varieties, National Science Foundation-funded researchers at The University of Texas at Austin, the HudsonAlpha Institute for Biotechnology, Texas A&M University and elsewhere teamed up to produce the reference-grade genomes of five cotton species, including two cultivated cottons. Their results are published in Nature Genetics.

Cultivated cottons are tetraploid, which means each has four sets of chromosomes: two from a ‘mother’ from Africa (Old World) and two from a ‘father’ from the Americas (New World). The ‘unification’ took place in the New World about one and half million years ago and produced five species.

In the past 8,000 years, two species were domesticated independently into Upland (or American) and Pima (or Egyptian) cottons that account for 95% and 5% of cotton production worldwide, respectively. Three wild relatives diversified in Hawaii, Brazil and the Galapagos Islands.

The team sequenced, assembled and compared the genomes of wild and domesticated varieties. They discovered genetic and epigenetic differences associated with a range of traits including seed production, environmental adaptations, fiber quality and disease resistance. “Epigenetics” refers to changes in traits that aren’t caused by a change in a genetic sequence, but by changes in the way genes are expressed.

“This work reaches the long-sought goal of comparing the polyploid genomes of cotton to its wild relatives,” said Kelly Dawe, a program director in NSF’s Division of Integrative Organismal Systems. “These studies provide important new insights into the evolution and function of genes that form cotton fibers, one of the world’s most interesting and important plant products.”