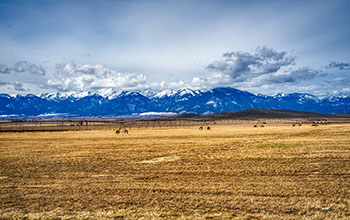 Farmers in parts of the western United States who rely on snowmelt to help irrigate their crops will be among the hardest hit in the world by climate change, a new study reveals.

In a paper published in Nature Climate Change, researchers funded by the National Science Foundation analyzed monthly demand for irrigation water along with snowmelt runoff across global basins from 1985 to 2015. The goal was to determine where irrigated agriculture has depended on snowmelt runoff in the past, and how that might change with a warming climate.

The researchers then projected the changes in snowmelt and rainfall runoff if Earth warms by 2 to 4 degrees Celsius (about 3.5 to 7 degrees Fahrenheit).

The findings pinpointed basins most at risk of having water at the right times for irrigation because of changes in snowmelt patterns. Two of those high-risk areas are the San Joaquin and Colorado river basins in the western United States.

“In many areas of the world, agriculture depends on snowmelt runoff happening at certain times and at certain magnitudes,” said Yue Qin, a geographer at The Ohio State University. “But climate change is going to cause less snow and early melting in some basins, which could have profound effects on food production.”

Qin, lead author of the study, designed the research with Nathaniel Mueller of Colorado State University and Steven Davis of the University of California, Irvine.

Other basins in which agriculture is at particular risk because of changes in snowmelt are in Southern Europe, western China and Central Asia.

“This study shows the importance of water resources from snowmelt on agricultural practices, and the potential impact of climate change on this precious resource,” says Ingrid Padilla, a program director in NSF’s Division of Earth Sciences.