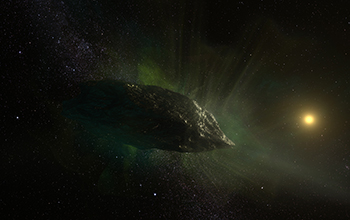 A galactic visitor entered our solar system last year — interstellar comet 2I/Borisov. Last December 15 and 16, astronomers directly observed for the first time the chemicals stored inside an object from a planetary system other than our own. The observations were made using the Atacama Large Millimeter/submillimeter Array, ALMA, an international astronomy facility funded in part by the National Science Foundation.

The ALMA observations from a team of international scientists led by Martin Cordiner and Stefanie Milam revealed that the gas coming out of the comet contained unusually high amounts of carbon monoxide. The concentration of CO is higher than anyone has detected in any comet within 186 million miles of the sun. This NSF-funded research is published in the journal Nature Astronomy.

Astronomers are interested to learn more about comets because these objects spend most of their time at large distances from any star in very cold environments. Unlike planets, their interior compositions have not changed significantly since they were born. Therefore, they could reveal much about the processes that occurred during their birth in protoplanetary disks.

The team was surprised to see large amounts of CO. “The comet must have formed from material very rich in CO ice, which is only present at the lowest temperatures found in space, below -420 degrees Fahrenheit (-250 degrees Celsius),” said planetary scientist Stefanie Milam.

“ALMA has been instrumental in transforming our understanding of the nature of cometary material in our own solar system — and now with this unique object coming from our next-door neighbors. It is only because of ALMA’s unprecedented sensitivity at submillimeter wavelengths that we are able to characterize the gas coming out of such unique objects,” said paper co-author Anthony Remijan of the National Radio Astronomy Observatory.

2I/Borisov is only the second interstellar object to be detected in our solar system. The first — 1I/’Oumuamua — was discovered in October 2017, at which point it was already on its way out, making it difficult to reveal details about whether it was a comet, asteroid, or something else. The presence of an active gas and dust coma surrounding 2I/Borisov made it the first confirmed interstellar comet. Luke Sollitt, a program director in NSF’s Division of Astronomical Sciences, explains that “NSF supports basic research not only for the expected results of a project, but because it can also give us startling new results such as this discovery.”