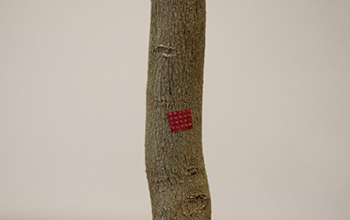 While the human world is reeling from one pandemic, ongoing epidemics are affecting crops and putting global food production at risk. Oranges, olives and bananas are under threat in many areas due to diseases that affect plants’ circulatory systems and that cannot be treated by applying pesticides.

A new method developed by National Science Foundation-funded engineers at the Massachusetts Institute of Technology may offer a starting point for delivering life-saving treatments to plants ravaged by such diseases.

These diseases are difficult to detect early and to treat, given the lack of precision tools to access plant vasculature to identify pathogens and to sample biomarkers. The team decided to take some of the principles involved in human precision medicine and adapt them to plant-specific biomaterials and drug-delivery devices.

Their method uses an array of microneedles made of a silk-based biomaterial to deliver nutrients, drugs or other molecules to specific parts of a plant. The findings are described in the journal Advanced Science.

The microneedles, which the researchers call phytoinjectors, can be made in a variety of sizes and shapes and can deliver material specifically to a plant’s roots, stems or leaves, or into its xylem (the vascular tissue involved in water transportation from roots to canopy) or phloem (the vascular tissue that circulates metabolites throughout the plant).

In lab tests, the team used tomato and tobacco plants, but the system could be adapted to almost any crop, they say. The microneedles not only deliver targeted payloads of molecules into the plant but can also be used to take samples for lab analysis.

According to Khershed Cooper, a program director in NSF’s Directorate for Engineering, “This project enables the efficient fabrication of materials using the building blocks of life, such as silk.”