Dramatic decrease in cold-water plankton during the industrial era 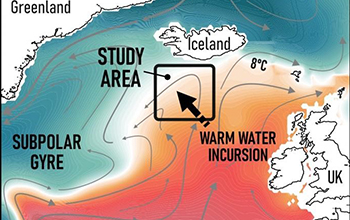 There was a dramatic decrease in cold-water plankton during the 20th century, in contrast to thousands of years of stability, according to a National Science Foundation-funded study by scientists at the Woods Hole Oceanographic Institution and other organizations.

The research, published in the journal Geophysical Research Letters, analyzed the fossilized remains of plankton sampled from the Northeast Atlantic Ocean south of Iceland. The scientists uncovered a striking change in the species that inhabit these waters.

The Northeast Atlantic is important for the global climate system and marine ecosystems. In this study, researchers provide the first evidence that Northeast Atlantic circulation in the 20th century was unusual compared to the previous 10,000 years.

That change caused a replacement of cool, subpolar waters with warmer subtropical waters near Iceland and has affected the distribution of marine organisms, especially plankton.

The research builds on earlier work that examined how North Atlantic circulation has changed since the industrial era. The scientists analyzed more than 150,000 specimens of planktonic foraminifera, tiny single-celled creatures that float in ocean waters.

They compared how different species of plankton fared over a 10,000-year period, using sediment from the bottom of the ocean to reconstruct how the Northeast Atlantic has changed.

Between around 6000 B.C. and A.D.1750, the region was dominated by plankton that prefer cooler waters. But during the 20th century, the relative abundance of the species declined dramatically. Transitional, warmer-water plankton species moved in.

Along with a change from cold- to warmer-water species, the researchers found indicators of changing nutrient and food availability, all suggesting that waters from the subtropics were making their way to Iceland.

The authors argue the evidence all points to changing ocean circulation.

“The research shows how tightly connected different parts of the Earth’s system are to each other,” said Steve Hovan, a program director in NSF’s Division of Ocean Sciences. “Changes in one part of the system result in changes elsewhere. What’s significant about this study is that it shows just how rapid these responses can be.”