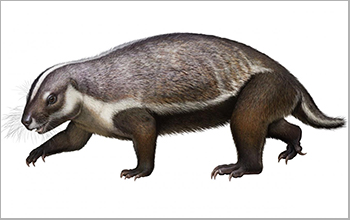 ‘Crazy beast’ was marooned on Madagascar

In evolutionary terms, islands are the stuff of weirdness. It is on islands where animals evolve in isolation, often for millions of years, with different food sources, competitors, predators, and parasites…indeed, different everything compared to mainland species. As a result, they develop into different shapes and sizes and evolve into new species that, given enough time, spawn yet more new species.

Such is the case with the National Science Foundation-funded find of a new, bizarre 66-million-year-old mammal in Madagascar. David Krause, senior curator of vertebrate paleontology at the Denver Museum of Nature & Science led the team of researchers that made the discovery.

The new mammal, called Adalatherium, which is translated from the Malagasy and Greek languages and means “crazy beast,” is based on a nearly complete skeleton that is astoundingly well preserved. The skeleton is the most complete for any Mesozoic (252 to 66 million years ago) mammal yet discovered in the Southern Hemisphere.

Krause said that “knowing what we know about the skeletal anatomy of all living and extinct mammals, it is difficult to imagine that a mammal like Adalatherium could have evolved; it bends and even breaks a lot of rules.”

In fact, although a lifelike reconstruction might lead one to think that Adalatherium was a run-of-the-mill badger, its “normality” is literally only skin deep. Below the surface, its skeleton is nothing short of outlandish, according to Krause. It has primitive features in its snout region not seen for a hundred million years in the lineage leading to modern mammals.

Adalatherium was also unusual in that it was very large for its day; most mammals that lived alongside dinosaurs were much smaller, mouse-sized on average. The discovery of this mammal, about the size of a domestic cat, that lived among dinosaurs and massive crocodiles on the fourth largest island on Earth was published in the journal Nature.