Catch rate is a poor indicator of lake fishery health 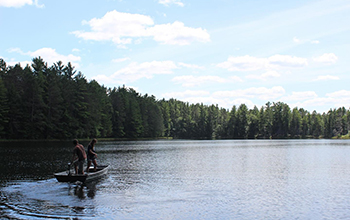 Fishery collapses can be difficult to forecast and prevent due to hyperstability, a phenomenon where catch rates remain high even as fish abundance declines. In a recent Canadian Journal of Fisheries and Aquatic Sciences study, National Science Foundation-funded researchers conducted a whole-lake experiment to reveal the causes of hyperstability in recreational fisheries. Habitat preferences were found to leave fish vulnerable to overexploitation.

Chris Solomon, an aquatic ecologist at the Cary Institute of Ecosystem Studies and an author of the paper, explains that “the few previous studies on hyperstability in recreational fisheries, like those in commercial fisheries, have relied on observational data. By using an experimental approach, we were able to reveal the underlying cause of a problem that has vexed fisheries managers.”

By manipulating the abundance of largemouth bass in a northern Wisconsin lake, Solomon and colleagues undertook the first experimental test of hyperstability. Over the span of three months, the team changed the abundance of bass in Camp Lake on a weekly basis, from more than 350 fish to only 25. Electrofishing was used to temporarily move animals from the lake’s main basin to an isolated side basin.

Once a week, three anglers fished for two hours in the morning and two hours in the evening, boating along the shore. They targeted the littoral zone, the area close to shore and a preferred bass habitat, and recorded the location of each fish they hooked. When their catch rates were compared to the known abundance of bass in the lake each week, the team documented that angler success remained high until only a few fish remained.

Solomon concludes, “It’s important for anglers to understand that what comes out of the water is not always representative of what lies beneath the surface. Even if the fish are biting, this doesn’t mean there are many of them. Anglers, fisheries managers and other stakeholders must work together to advocate for better monitoring and sensible limits on effort if we want to sustain good fishing opportunities now and in the future.”

Adds Christopher Schneider, a program director in NSF’s Division of Environmental Biology, “This study highlights the fact that good fishers will find fish, even when fish populations are low. We’ve seen this in Gulf of Maine cod fisheries and many others, supporting the conclusion that catch rates are not good indicators of underlying fish population numbers.”